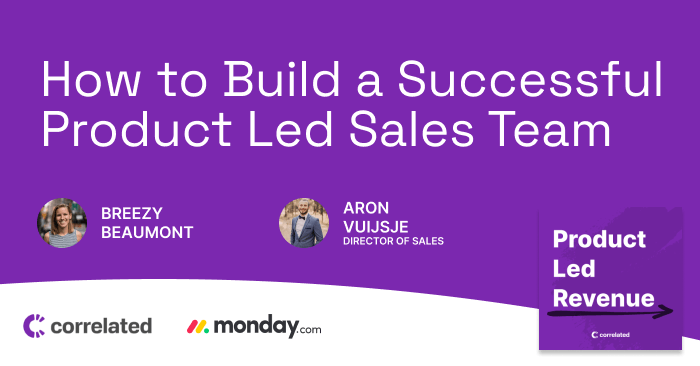 How to Build a Successful Product Led Sales Team | Aron Vuijsje, Director of Sales at Monday.com

One of the pillars of every company is a sales team - but when a company is product-led, does you still need a sales team? According to our guest, Aron Vuijsje of Monday.com, you do.

In this episode of Product Led Revenue, Aron shares the lessons learned since the early days of joining Monday.com. He reveals what it's like being the first sales hire and standing up for what he believed was the best course for the business — which resulted in the executive team allowing him to build a sales team.

Aron and our host Breezy Beaumont also touch upon structuring your sales team, how to find great hires, and what skills to looks for. Finally, Aron talks about how his experience at Monday.com helped him grow as an individual contributor and understand the difference between a manager and a leader.

🎙️A piece of advice for individual contributors: be ballsy

As the first sales hire at Monday.com, Aron had to prove that even a product-led company needs a sales team. So, in the beginning, he dedicated 50% of his time to CS and 50% to sales. Then, once he started showing results — closing a deal with the biggest account at the time, for instance — the executives gave him the go-ahead to create a sales team. But, as he says, the foundation of his success was the ability to speak openly about what he believed would benefit the company. ''Don't be afraid to speak towards what you want to get to, but do it in a way where it's clear that your goals and what you're aiming for are very much aligned to the needs of the company. So first, ask yourself, 'Is this role making an impact? Is it something that we need?' Then ask yourself, 'Is this aligned to the needs and the interest of whoever I need to convince?' And then have that conversation where it is clear that our interests are aligned, which makes the process so much easier.''

Many factors determine whether a lead would go to a sales team. The process of data collection varies among companies, but this is how they approach it at Monday.com. ''The first thing that we're looking at is from the MQL, and we're saying, 'Okay, from this company size onwards, it becomes relevant. Anything that's below that, we still want them to have a good experience. We still wanna make sure that they have access to our customer success team, but it's not routed to sales.' [...] Of course, there are a lot of other things connected to it as well. Which banner did they come from? Some banners mean a higher likelihood of a conversion rate because that's where the type of customers who sign up usually go. And that's where we get a little more product-led growth. The moment they sign up, we immediately know who signed up, understand their title, see the uses they have, and most importantly, triggers that tell us that this is likely to be a customer we're looking for.''

🎙️Product, sales, and marketing teams need to work together

There's a rooted belief that product and sales teams have irreconcilable differences and can't work together, as if they speak different languages. However, as Aron says, once companies acknowledge the power of these two teams collaborating closely, that's when the magic happens. It's the same with the sales and marketing team. ''We're doing everything we can to build strong relationships and collaboration between sales and product. And, by the way, sales and marketing as well. It's a similar situation where you often see friction. The marketing team might complain about the sales team for not closing the deals, and the sales team is complaining about the marketing team for not bringing the right leads. A good relationship between the sales and marketing teams will mean we get much better feedback about how they need to approach the customers, which will improve our life. They will be able to manage it much better if we understand what matters.''

Do You Need a Sales Team If You Are a Product-Led Company?

"[Monday.com] was always product-led. It was only product-led in the beginning. When I started in 2016, I was the 16th employee, so it was a small team. [...] An interesting detail is that we had 10,000 customers working with us before we even had the sales team.

If you start looking at how you can build a sales team on top of that product-led growth, it comes with an amazing synergy that allows one to consistently improve the product, which is important. But that also allows you, as a sales team, to begin at a much better starting point by leveraging product growth."

A Manager and a Leader Are Different

"A leader is what you should be, and a manager is a role somebody has ascribed to you. So being the manager means that, officially, according to the title that you have, people should listen to you.

''My goal is not to have a team of ten people that all have the same skill or even the opposite. One of the big focuses at Monday.com is how we can grow and strengthen the team as a whole.

We're trying to stay away from just individuals and connect the way that we reward people,  communicate with them, and allow them to progress throughout the organization. So what is teamwork and how much do we help other people inside the team, et cetera, is becoming crucial.''

[06:47] ''My focus is very much around value-based selling and helping the customer be successful. And throughout that process, we grow together, which also, in the end, means you're growing accounts, which connects to the bottom line on which we are measured — the recurring ARR.''

[28:18] ''The more luxury you have in regard to the number of leads, the tighter you can make the system. The less leads you have, the wider you need to go. Because, in the end, you want to make sure that your team has enough to work with. So, based on the luxury that you have, you want to think about things like work email versus personal email, the engagement that the customer had with the platform, the specific type of actions, the titles, and the positions that are included — which allow you to funnel further.''

[31:46] ''Data is something that should be shared across the organization. And the more you empower your team members with the right data, the more they can utilize it to get great results.''