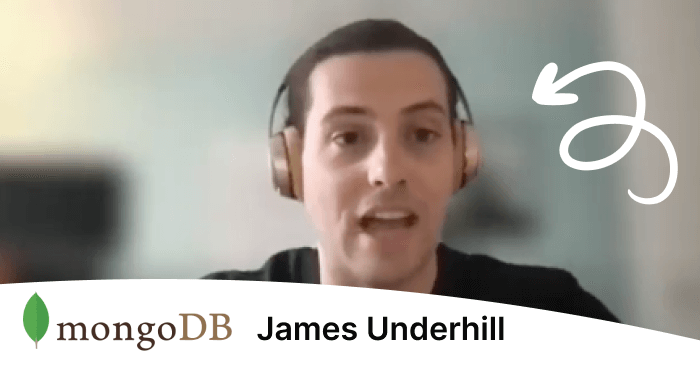 Today's SaaS companies are combining product-led growth with sales-led tactics to drive more revenue and acquisition than ever before. But like anything else, the shift to product-led growth doesn't come without its challenges. A PLG strategy requires you to give customers access to your product so they can experience it, which changes the way you position, market, and sell. The key: customers need to understand the value of a product upfront and quickly (time-to-value).

MongoDB has spent the last 5+ years switching over to PLG. They moved from a booking and commit-based model to a true SaaS approach with ARR as their key metric.

In this episode of Product Led Revenue, our host Breezy Beaumont welcomes James Underhill, Senior Director of Sales Operations & Strategy at MongoDB. Breezy and James get into product-led growth strategy and the benefits it brings to the company. In addition, they discuss committing, product value, and programmatic activation.

💡 What they do: James is the senior director of sales operations & strategy at MongoDB.

⚡ There are no benefits to getting a commitment

‍MongoDB empowers innovators to create, transform and disrupt industries by unleashing the power of software and data. For some time now, the company has been following the usage-based model of sales, which is a much less complex sales motion. James points out that during this evolution of the sales side, they were faced with a lot of challenges, but they also learned a lot. "It took us too long to realize that we need to think about our sales comp plans from the point of view of, ‘What's best for the customer?’ If a customer says that they want to make a commitment, that's fine, let them, but don't force them to do it. And I think we overvalue wanting people to commit to deals for too long. And so we're at the point now where, if you're a sales rep, there isn’t really any benefit to getting a commitment — just get people to start using the product. […] Another kind of nugget is that we didn't have a way to document new use cases or new workloads. So, if somebody's starting to use the product to do a different thing, that's something that we want a salesperson to kind of facilitate, but we didn't have any way of tracking that or auditing it."

‍According to James, the most important thing is how much the customer values the product. "At this point, we're focused more on not necessarily getting that person but getting the product in the hands of the people who get value from it. And then they experience value, and the groundswell builds up. The sales rep should still be trying to get to the business stakeholders, but the product, at that point, is playing more of a role in the value demonstration. And so, it was a non-starter in an upfront commitment selling licenses world."

⚡ The relationship between customer success and sales.

‍Even if you've encouraged your sales teams to get the product into people's hands, it's important to know where the transfer occurs between sales and customer success. James notes that the problem is that customer success is an overlay role that is focused on ensuring people use the product in a way that benefits them. That's why there is a conflict between those roles when it comes to their comp plans. "Customer success could interact with the customer and say, 'Hey, you're running super hot; you're running really expensive backups that you probably don't need. You can disable that, and you'll bill less.' They're like, 'Great. Thank you so much. I'm now using the product better. I'm very happy.' Then the sales rep is like, 'Why is my consumption going down? I get paid on consumption.' And so there can be a healthy disagreement, sometimes, between those roles."

Transition to a Usage-Based Model of Sales

"Sales is a science, not art at MongoDB. If people don't fit into the process of our sales — the way things work at Mongo — those types of reps don't tend to do well. And so we hit a really well-defined, well-documented, and well-audited process of deal qualification. We use the MEDDIC process, and we get to a point where we're very strict about qualifying deals in a very specific way. And the transition to a usage-based model basically makes that sales cycle shorter. And when you are trying to sell a commitment and getting people to say like, 'Hey, I'm gonna commit to spending $20,000 or $100,000 for this year upfront,' you have to get to the point where you're talking to the economic buyer, you're identifying that they have the budget for that amount and that they're willing to earmark it to this product for this amount of time. And those are difficult conversations to have, where you hit all this complexity, like security and legal and all these things."

"At MongoDB, we have a self-serve full segment, so people can go to a website. We have marketing drive people to sign up, swipe their credit cards, and start to consume MongoDB Atlas, and they don't have to talk to salespeople at all. And there's a big question of how do we want it? We could just send all those people to sales, but do we want that? And, if sales converts somebody to a contract from spending on a credit card, is that valuable? And so, there's a big kind of workstream going on right now to figure out how we want to use those because this is a really valuable customer cohort. […]

There's not necessarily a right or wrong way to use a database, but there are good and bad ways to use it. And I kind of think of it as — what we want to achieve is a GPS. Like, I'm in New York City right now. I put my GPS to LA, and if I start driving, it's going to tell me when I'm going in the wrong direction, and it might tell me I actually need to get out of a car and take a plane. So what we've done is we've established the most common areas of concern — or it's mostly the wrong directions. Like, when our people are going in the wrong direction or there's something simple they could change, so we're having a better experience."

And then, another kind of pillar is: what's the opportunity of the account? Because somebody could be going crazy, could be going ham with databases, doing all this crazy stuff, testing, but we know that they're a super small account; until they get funding and can actually have a commercial app, they're not going to spend meaningful amounts of dollars."

[14:00] "One of the first principles we [MongoDB] established across our go-to-market: we only acquire customers, expand customers, and retain customers."

[15:52] "Customer success is still aligned to, not necessarily expansion or renewals, but retention is their biggest objective. They get compensated based on renewal rates and customer success and qualified leads."

[24:58] "Our comp plans are focused on driving new logins, new customers, and just growing the ARR in accounts. And I think just trying to simplify it to those things as much as you can makes it simple for the reps to understand what their priorities are and what you want them to do and to focus them on what is going to create value for customers."