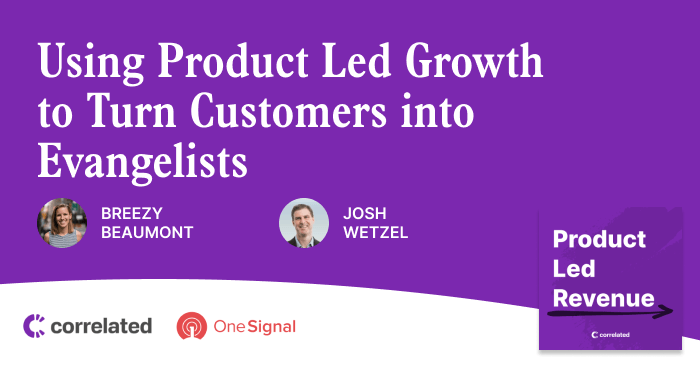 Product-led growth has been revolutionizing B2B and SaaS sales for some time now, especially after the pandemic. And it's working, leading to rapid growth for companies like OneSignal, used by 1.4 million companies around the world.

But that rapid change leads to what Josh Wetzel, OneSignal's Chief Revenue Officer, calls "intellectual challenges," some of which are expected, like massive amounts of data, and some of which aren't, like language barriers with new clients you weren't expecting.

In this episode of Product Led Revenue, host Breezy Beaumont talks to Josh about OneSignal's response to those challenges and how culture can play a role in meeting them.

💡 What he does: Chief Revenue Officer

💡 Noteworthy: OneSignal is a web-based product used by 70%+ websites with push notifications and international customers.

💡 Where to find Steffen: LinkedIn

⚡ Leverage PLG to turn customers into evangelists for your product

At OneSignal, the goal is to make the self-serve free option so easy and robust that customers rave about it and ultimately decide to become paying customers. "Our goal ultimately is to turn every visitor into an evangelist for the product. And I think you start that by giving a really great initial experience where it's easy signup, easy setup, easy to get going, and easy to get some value," Josh says.

As OneSignal has grown, they've had to iterate their tech stack frequently. There's so much data available in PLG that it can be challenging to dig through it. "I really love having all the noise. It's great intellectual stuff, but the core point is the stack is really important but also having the right people who can make [sense] of it. [...] We had to be much more thoughtful about what are the other factors and data we can bring to bear to make a better determination," Josh says.

⚡ The best companies are supported by a strong collaborative culture

One of the challenges for PLG companies is that traditional marketing and sales roles have blended with customer support. Some salespeople struggle with that transition, so a collaborative culture is critical. "We were very mindful of hiring people that would fit our culture," Josh says. "We've been successful hiring hungry people who are open and very thoughtful about being in a team and collaborative environment."

Consider price differentiation based on the product's functionality

"We differentiate around more advanced functionality, so, personalization and the segmentation components. If you want to [...] do some of the more sophisticated things, like building welcome sequences or segmenting audiences more than a little bit more than a couple of times, that's where you hit these paywalls. That's really been nice for us.

It's less about usage and much more about the sophistication you want to put in the product. What I like about it is, when companies are starting to get to that point where they want to use a little bit more of this functionality and get more value from the product, they're more likely to be able to pay. The core costs for us as a business sits [in the sophisticated actions] because that's where the large computational power comes in versus just delivering messages, which isn't that difficult. At our core, we differentiate around personalization, segmentation, and automation functionality."

Enrich every self-serve customer, even if you don't think they'll become long-term

"We have two channels. We have the self-serve sign-ups, people that are just coming in and signing up wanting to use the product, and those people go into our backend because they become a user of the product. We do enrich each one of those. We're looking at who the person is, what's the org, and their likely use case. We're trying to discern the role, and to create an experience, a journey for them that's going to be unique relative to where they probably sit in the org and what they think about.

So that's the people that are signing up to use the product. [...] So when people sign up and meet certain metrics based on the enrichment, they get put into the CRM into a journey sequence leveraging more of the sales-driven process. If they don't hit that marker, they're just on a traditional journey of educating them.

We also have somewhere on the order of dozens, but not hundreds, of what we consider traditional sales leads. They're asking to have a conversation. And we get a lot of noise in that as well because you get so many people using the product. So sometimes, it's portal-oriented. Most of the time, it's somebody who's legitimately interested in the product and wants to talk to them. And so we do the same process of enriching. Those go directly into our CRM.

We basically take a similar process in terms of how we enrich, and we're trying to funnel everybody that makes sense based on size, need, and or inquiry into a conversation with a human."

Be prepared for challenges you don't expect, like language barriers

"We've also had to probably expand internationally faster than a company would normally. [...] We have some unique challenges. So with that many great users signing up, it's awesome, but it's almost evenly distributed across the globe. So we do have some language considerations, and we try to keep it simple to consider how many people are coming from different places and their grasp of the language or their technical grasp [of it]. Some people are really technical; some people aren't."

"We truly do believe everyone's equal. I don't care if you're delivering food for us; everyone plays a role. So we had to get people who were thoughtful about that. So early on, we hired a couple of people that were industry-specific. And we hired a couple of people who came from non-technical backgrounds. I think because there's so much hustle [and] a global base and you're kind of dealing with so many different people and different walks of life, the people that performed the best [...] come from another industry where they learned good work ethic. They just have the hustle. They're quick learners."

Pricing should not be an underrated part of go-to-market

''For us, it was pretty straightforward. You could either charge the number of contacts you have in the system. So what we call subscribers because, in our world, people have to opt-in. We firmly believe in that, whether it's email, SMS, Push.

So it's a subscriber where we're collecting information, and you can message them. And on the Push side, we've always had unlimited usage. We have some people that send a couple of messages a year to all their bases, but they're important, like governments or municipalities—Healthcare in some cases. And then we've got people like major sports leagues or media companies that are sending millions, if not 100+ million, in a given day on a regular basis.

So we went with contacts; we call them subscribers. One of the things that has evolved, though, is as we've added new channels, like SMS, it has to be message-based. So we charge the number of numbers you have, that your messaging, that are messagable. And then we charge based on message total because you've got carrier costs. So we've had to augment over time as we've expanded the product.

But I really like the pricing because it focuses on where, again, it goes back to what I said earlier about where we start charging. We also charged pricing on where the cost is. The cost is in the number of users you have.''

[2:30] "We want people to be able to deploy this and start building a customer list and loyalty right out of the gate. We have a really robust free product. So when you click that Get Started Now [button], you get to a place to quickly sign up. [...] It takes about 15 to 30 minutes max to set it up ."

[8:36] "I don't care if you're a single-person blogger that's never going to have more than 500 people on your website or you're a business insider. We care deeply about having a great experience for each one of those folks."

[35:03] "I can't trust pricing enough. It's something that we thought about a lot. We did a lot of research when I first got here around what we were going to do, how we would do it. And I think we landed in a really good place where it's synergistic for the customer and for where our costs lie and the value that's being created."